As promised, all this month, I will be discussing Sjogrens Syndrome. A disease I have been newly diagnosed with. Well, I still need a definite diagnosis via a salivary biopsy, but that will be soon I hope. My renal doctor is pretty sure that is what it is. So, why am I seeing a kidney doctor? I will get to that. Let's start with some basics first.

Sjogrens Syndrome is an Autoimmune Disorder. That means basically your body attacks itself, primarily through tears and saliva. At least that is where it starts. Those are the first two primary complaints of people who suffer from Sjogrens. They were for me. I have had dry, and so called gritty eyes, for as long as I can remember, at least since my early 20's. I am 47 now. My dryness, and vision issues that went along with it would come and go it seemed. Some days fine, other days not. I have seen eye doctors, and been given reading glasses, but no reason for why my eyes were "dry". Try eye drops was the most popular advice, as no disease of the eyes was seen. I personally figured it could be feasible that due to seasonal allergies, and lots of computer use, maybe allergy meds and tired eyes was just the problem.

However, when I got dry mouth, I would say within the last 5 years, I started to think of other things. Dry mouth is very distracting, it can drive you crazy. You are not really thirsty, but you feel like you have to have a drink. Now even though I didn't start to notice dry mouth until about 5 years ago, I have had issues with my teeth since I was a teen. I shrugged it off as all my family had bad teeth. Dry mouth destroys your teeth. So do a lot of other things, but so does dry mouth. One thing I did not realize, is the actual location of the Parotid Glands. Those are the glands that create saliva. They are located on the side of your face by your ears, down by your lower jaw, under your tongue, and then in other places, but much smaller. I have been suffering from migraines for probably 15 years, or so. About 4 a year, was typical. My point is the locating these migraines would start was right around the front and back of my left ear, and then travel down my neck, and up the side of my head. Right before Obamacare was passed, when insurance companies could still deny you care for pre-existing conditions, I was having an acceleration of migraines, about one every other week. I sought medical attention, and a CT of the head was ordered. My insurance company refused to do it saying some bogus reason, and I believe it was because they considered it a pre-existing condition. Since I didn't have 3500 dollars to pay for it out of my own pocket, I just suffered with it. Eventually they went back to the more normal average of 4 a year. I am now curious if those glands were swollen and that is what was causing the pain. I also have discovered that something that I thought might be a bad tooth, was probably my mandibular gland swollen and painful. This lasts for only about 2-3 days, so it never gets seen by my doctor. It also only happens about every six months. Since I started doing salt water rinses, it seems to help a lot.

How did I end up with a diagnosis of Sjogrens? For years I have thought I might have MS, or some other mystery disease. I had vague, strange symptoms that would seem to come and go with no explanation. I had researched Sjogrens before, as well. In December I was extremely ill, to the point where all I could do was sleep most of the day, or at least do a little bit then need to sleep. My eyes were doing some very strange things, to the point that I refused to drive for about two weeks. I could not really eat, and was very clumsy. I have always been a little clumsy but this was worse. I never had a fever, drank well, created urine, etc. No vomiting or diarrhea, etc. I thought I just had the flu because we had been so busy and I felt worn out around Christmas. After about a week I thought, wow this is some flu. I haven't had the flu in over 10 years, so I figured I was older maybe it was worse. Finally I told my husband I felt like I needed to be seen. My labs were off the wall weird, and it appeared I had some kind of kidney involvement. I was referred to a kidney doctor who said I have basically only one kidney working well. There is no absolute proof that Sjogrens caused the kidney issue, but it is highly suggestive. Since Sjogrens can attack other organs, especially for those with Primary Sjogrens, it is very probable. They also can not tell me how long my kidney was not working properly, but they can say it did not happen quickly. So, my focus for the month of April will be Sjogrens with kidney involvement. There are a lot of things I have had to learn about keeping my good kidney healthy, and since we live in Florida, I have to now prepare differently for hurricane season. I will be sharing all this info, plus basic Sjogrens info.

For now I want to let you know the symptoms of Sjogrens. I have had all of these, but they are not constant for me, especially the dry cough, and joint pain. To find more information about Sjogrens, visit the Sjogrens Syndrome Foundation. Please if you have any of these symptoms, along with dry eyes, and or dry mouth, please seek out your doctor to discuss. Do not take any info in this blog to be medical advice, it is not. It is information, to help increase awareness and knowledge of the disease. Anything that I try, or have done, since being diagnosed is under the approval of my doctor only. 4 million people have Sjogrens, but not many people know about it, and doctors don't either, which might be why it takes so long to get a diagnosis. Be persistent, and be an advocate for yourself. My doctor thought of Sjogrens right away when she heard I had dry eyes, and mouth, but has never had an actual Sjogrens patient.

1. Dry eyes and mouth, as I stated are the two most common early complaints. 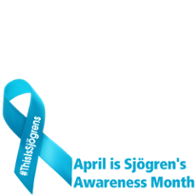 Copy this code to your website to display this banner!